Pioneering Voices is a museum-quality traveling exhibit including photographs and interviews with people of all ages who are transgender and some of their partners and children. Through first-person accounts and positive images, this exhibit seeks to challenge damaging myths and stereotypes about transgender people and to educate people about this marginalized, and often invisible group of people.

The exhibit is on display in the vestibule through the end of December, 2018.  An opening reception takes place November 4th from 12:30 to 2:30 PM. Cedar Lane UU Church is located at 9601 Cedar Lane in Bethesda, Maryland.

You gotta come to the Center Arts Gallery before March 24 to check out Jo Martinez’s artwork! But in the meantime read all about Jo in The Washington Blade‘s Queery!!!
http://www.washingtonblade.com/2018/03/14/queery-jo-martinez/
Tweet 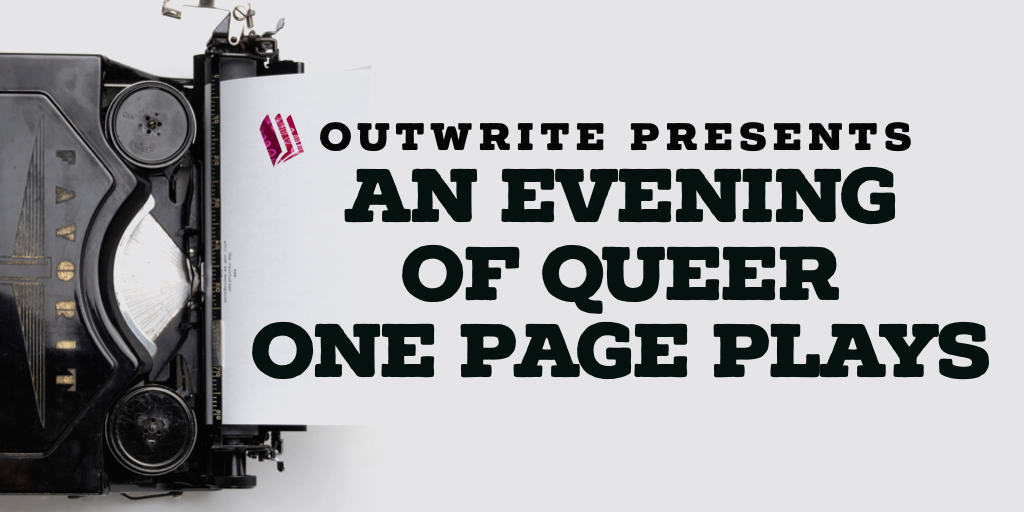 OutWrite Presents An Evening of Queer One Page Plays

WASHINGTON, D.C. — OutWrite, Theatre Prometheus & DC Queer Theatre Fest will present the fruits of the 2017 A Queer One Page Play Competition for one night only upstairs at Ten Tigers Lounge on Wednesday, February 7th, 2018.  The six winning plays will be put on alongside a performance by Regie Cabico of his solo show Faith, Hope & Regie.

Tickets can be bought through the venue here.  Please note that Ten Tigers is an intimate venue.

The six plays are:

“We’re so proud to present the work of these talented playwrights to the public,” said OutWrite Community Chair Dave Ring, who organized the competition in conjunction with support from Theatre Prometheus.  “We’ve never done anything like this before but the energy around the both competition and the upcoming performance has really been something special.  I’m so grateful to everyone who’s been a part of it.”

The plays will be directed by four DC-based directors, selected by Theatre Prometheus and DC Queer Theatre Fest:

The winning plays were selected by a panel of local judges on the basis of “originality, representation, and relevance to the competition’s LGBTQ focus.”

The judging panel consisted of:

More background on the competition can be found here:  https://onepageplay.tumblr.com/

Outwrite is a program of The DC Center for the LGBT community that celebrates queer literature, authors, writers, and poets. The 2018 festival will kick off on Friday, August 3rd — details TBA! On Saturday, August 4th, there will be a full day of readings, panels, book sales, and exhibitors at the DC Center. To finish the weekend, a number of writing workshops will be held on Sunday, August 5th.  We are currently accepting proposals for our upcoming program.  Further information here:  www.outwritedc.org.  Find us on Facebook and Twitter.

Founded in 2013, Theatre Prometheus is a not-for-profit organization with a goal of exploring and promoting woman-focused, diverse narratives. We believe in the power of local theater and are committed to providing opportunities to local artists, creating productions both by and for the communities we live in.

Founded in 2012, the DC Queer Theatre Festival is dedicated to unleashing and celebrating the underrepresented voices and diversity of our artists, audiences, and area. By featuring new plays with themes relevant to the DC area and local artists with roots in the community, the DC Queer Theatre Festival combines quality theatre with activism and charity. More info at www.dcqueertheatrefest.org

2017 was an exciting year for arts and culture at the DC Center.   For the first time ever, the DC Center appointed a Director of Arts and Cultural Programs.   Kimberley Bush, who was previously the Director of our film festival, Reel Affirmations, stepped into this new role and worked with our dedicated and amazing chairpersons and volunteers to coordinate all of our arts programming including:

2017 brought the 24th Annual Reel Affirmations Film Festival which was held for the 3rd year at the historic Gala Hispanic Theater. We screened over 40 films over the course of 4 days ( up from 3 days in 2016) to hundreds of LGBTQ individuals, our allys and supporters. Over the course of the 4 days, over 10 filmmakers participated in Filmmaker TalkBacks/Q&A with a catered meet and greet reception. Ticket sales was not as fruitful as originally expected mostly due to the myriad of events occurring on the same weekend including Howard University’s 150th Anniversary/Homecoming and the Marine Corps Marathon just to name a few.

RA XTRA experienced huge success with 13 screenings, typically one per month and on one occasion two in one month. RA also held, apres film screening, a quarterly, multicultural director/producer Talkback/Q&A with catered cocktail reception. This year, RA introduced its’ Countries and Closets Sub-Series, which explores films that depict the lives of individuals who live in countries where to be LGBTQ is illegal or banned. We also held our first Reel Trans Film Festival during Captial Trans Pride and 2017 will mark our 3rd annual World Aids Day Film Screening.

Outwrite was extraordinarily successful with over 300 attendees over the course of 3 days in August 2017 with over 40 well received presenters/speakers and 25+ literary vendors. Many of our readings/presentations were sold out/at capacity.

Center Arts Gallery opened in April 2017 featuring all genres of art created by LGBTQ Artisans. Our Grand Opening Reception of our first installation, in April, was free and open to the public. Our full-color exhibit showcased 14 pieces of visual art created by the group members The Art and Peer Support Group facilitated by Antonio Pineda. Mr. Pineda is a Treatment Navigator at the Infectious Disease Clinic at MedStar Health Research Institute at Washington Hospital Center, NW Washington D.C., where he specializes in helping clients who are living with HIV/AIDS.

Our next exhibit in Dec 2017, will feature the work of Jo Martinez. Jo’s art centers primarily on topics of sexuality, psychological and gender identity with recurring themes of power, vulnerability, domestic violence and the sway between them.

Finally this year’s Capturing Fire Poetry Slam took place June 9-11th.   The DC Center is proud to have been the first home for the Capturing Fire slam, founded by Regie Cabico.   We are equally excited that the slam will continue, now as an independent project, under Regie’s Leadership.

Our new spoken word initiative, Ignition, was developed in 2017 and will officially launch next year.   The Spoken Series seeks to empower Trans & Queer people through spoken word art culture. The genres include performance art, poetry slam, story telling. Ignition seeks to fuse the spoken word with all genres of expression. Ignition The Spoken Series programs are open to all Trans & Queer Allies. Look for more information about this new initiative soon.

Center Arts received generous support this year from AIDS Healthcare Foundation, the Cherry Fund, the Mayor’s Office of Cable Television, Film, Music, and Entertainment, and the DC Commission on the Arts and Humanities.  We also received generous in-kind support from the Human Rights Campaign as well as Tito’s Vodka, Barefoot Wine and Lagunitas Beer.

And of course, none of this work would be possible without generous supporters like you.

Donate now to support Arts and Cultural Programs at the DC Center.