You’re lying on your right side. Your lights are off, teeth brushed, minty, and you can’t sleep. Your curly hair sprawls over the goose down pillow your mother bought at Macy’s three years ago when you were eleven. This is an expensive pillow. You are not allowed to bring it to sleepovers. You followed that rule until Girl Scout camp, when you wrapped it in a beach towel so she wouldn’t notice. You couldn’t sleep without it. You never join pillow fights.

You shut your eyes tightly, tell yourself you’ll never open them, not until morning, but soon you’re staring at the red 1:37 of your digital clock. One minute has passed.

You’re uncomfortable on your side. You rotate, lie on your back. Your stomach sits differently than in middle school, when you were teased for being a stick. You haven’t heard that for a while, feel gravity sitting on you like a needy cat. You’re on your first diet, but today your best friend Abigail made you brownies. Just because. You didn’t tell her about the diet, but you don’t hide things well, secrets always on your face.

You try to open your mind. You want it to drift naturally until you forget you’re thinking about anything at all. You count down the months until you’ll be old enough for Driver’s Ed (five). You think about the first time you put on tight jeans after shaving your legs, how elated you felt, so soft and alive. Almost sexy. Think about the new girl whose eyebrows look like they’re upside down. Her name is Cecily. You hadn’t heard that name before, and can’t imagine it fitting anyone else.

Last night, you dreamt you were in bed with Cecily. You weren’t touching, but it wasn’t like other sleepovers. You were together under the thick quilts on the basement pull-out couch, desperately wanting her there.

Today she whispered in your ear, Stephen kissed me in the parking lot. Cecily’s lips always look like she’s wearing lipstick. Stephen is tall for a ninth grade boy. He has dark brown skin and smiles a lot. You tried to smile when Cecily told you about the kiss, but your skin felt like you just came inside from walking in snow without a scarf. Tight, cold, thawing.

You think about Billy, the toy goat you left outside in first grade. He was a small, stuffed black goat. On your seventh birthday, you pulled him out of a carefully wrapped package from your Aunt Michelle. Billy wasn’t your favorite stuffed animal, which is maybe why you forgot him next to the swingset. You needed your hands free so you could hold the chains until your palms blistered. Abigail, swinging next to you, would whip her hands behind her and hover in the air before falling gracelessly to the grass. Your grandfather is quadriplegic, and your mother always scared you out of jumping off swings. While Abigail flew, your sandals would fill with mulch as you slowed to a stop.

You left Billy outside one day, went home on the bus. That night, it rained. He was the size of your palm. You looked for him the next day, but never found him.

You don’t like thinking about Billy, but you always do when you can’t sleep.

You think of Abigail, who has always been pretty. But Cecily makes you want to shave your legs and put on tight jeans.

You think of Christmas. Christmas Eve has always been the night you can never sleep. You’d squeeze your eyes until your face hurt, sure you felt Santa hovering over you, staring, making sure you were asleep. You never peeked. Santa always wrapped his presents in shiny reindeer-printed paper. When you were six, playing hide and seek in your parents’ bedroom, you dangled your small stick-body from their bed, lifted the bed skirt excitedly, and saw the reindeer paper lying underneath. Santa’s paper. This makes you think of Billy goat in the rain.

You gently push off the covers and tiptoe to the bathroom down the hall. Your bathroom is painted bright orange. Your older sister, Leah, complains the color makes it hard to put on makeup. You always think makeup is hard. Your skin has started to look like hers without makeup, red and bumpy on your forehead and chin.

You drink two glasses of lukewarm tap water and sneak back to bed. The clock says 2:12.

You lie down on your left side. You once heard sleeping on the left gives you nightmares, but you’re finally comfortable. You slide your hand up your shirt, rest it in the crevice between what can hardly be called breasts.

You’ve done your math homework, written your essay on To Kill a Mockingbird. Yet you can’t sleep.

You know you’ll rise for school in four-and-a-half hours. You’ll try putting on makeup in the bright orange bathroom. Your eyes will water under harsh eyeliner pencils, until you give up and go downstairs, red-faced and bleary-eyed. You’ll eat a piece of toast. All other breakfast makes you queasy.

Leah will start the car your family used to drive to the beach every summer. The drive to school will be short. The gravel of the parking lot will get caught in your shoes as you hurry to class. You’ll pass through the crowded hallway, elbows out, put your jacket in your blue locker. You’ll go to first period, Art and Design. Cecily will be there. She’ll tell you she’s falling for Stephen. What does that mean? You’ll know someday, she’ll answer, wistful, smiling. Her lips are red. You’ll feel the buttered toast at the bottom of your belly. You are falling, falling, falling. 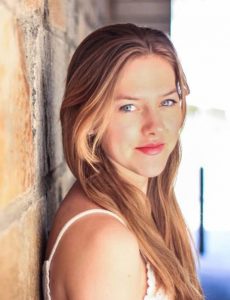 Allison Punch is the co-creator of #WordWeekHustle, an online community for those whose side hustle is words that aims to foster friendly competition and build writing as a daily practice. She has experience in politics and works at an international development media platform. A native Michigander, Allison currently lives in Washington DC. She graduated from the University of Michigan in 2014, and is working on her first memoir.  Follow Allison on Twitter at @ajpunch.

Allison Punch in the winner of the 2016 Deacon Maccubbin Young Writer Award in Prose.