Yesterday I watched a 19-year-old boy die. On YouTube. I watched the boy get shot in the back by the police. The video was nearly 3 minutes long. The boy squirmed the entire time. I have a fear of stepping on worms. This is called scoleciphobia. I do not know if I’m more afraid of stepping on them or of them stepping on me. Either way. I am afraid. The boy’s blood was red. It looked like wet paint. On average it takes paint 3 days to dry. When placed in a T-shaped enclosure, earthworms can be taught how to turn left or right. When it rains, they come to the surface to escape from drowning in the oxygen their skin snatches from hydrogen bonds. I do not know if they’re more afraid of getting stepped on by me or drowning themselves. Either way, they are afraid of dying. This is called necrophobia. Yesterday I read about a 19-year-old body getting shot in the back. Not the same body, a different one. Blood is usually blue until it comes into contact with oxygen. Earthworms do not come to the surface because they are drowning. Earthworms come to the surface because they confuse the vibration from rainfall with predator. When shot in the back you can only pray that your blood stays blue. You can only hang, like a wet paint sign. I can imagine that when a gun is pointed at you the world begins to look a lot like a T-shaped enclosure that you can only turn left or right in. The boy’s arms were cuffed together. The boy’s legs were a riot. They boy’s eyes must’ve seen a falling cave. Yesterday, I heard about a 19-year-old girl getting shot in the back. Not the same girl, a different one. I wonder if the worms mistook her blood for rainfall. I wonder if the shooter mistook her body for prey. Earthworms do not have eyes but they can sense light. The shooter must have had eyes that could only see color. Blood is really a dark red that appears blue when viewed through the skin because of light refraction. And I guess this is the difference between seeing in light and seeing in color. On average, it only takes reading the headline to know which shade of brown the body is not. I watched a person die. On the Internet. Over a million views. 6000 blue thumbs sprouting like worms coming upward from Earth. 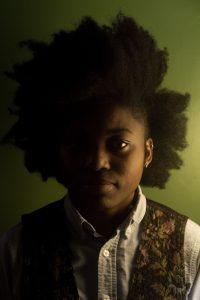 Shyla Hardwick is a writer and biologist from Detroit, MI. A member of the Toni Cade Bambara Scholar/Activist Collective, Shyla believes in the activating potential of words and uses voice to catalyze positive change. Shyla is interested in exploring the transitional space between different levels of organization and spends way too much time thinking about black holes. Shyla teaches and performs poetry at schools, venues, and bookstores across the nation.  Shyla’s website is www.shylahardwick.com.

Shyla Hardwick is the co-winner of the 2016 Deacon Maccubbin Young Writer Award in Poetry.