Another white boy has purchased the doll. For a grand total of $14.61. A brand new inflatable black grrl. Sold. To 3700 Locust Walk. It costs $3.47 for the shipping & the manhandling. But it don’t cost nothing to watch the snorting frat brothers line up in their barnyard living room

while the one with the nice smile and the nice parents and the future we all hope is so nice, injects his real benevolent tongue between her plastic legs before ramming her face down through her synthetic throat so he can fuck her from behind. But that’s just Christmas retail therapy, right?

the dead for the thousandth time. Tonight, Sally emerges at the foot of my bed searching for her daughter, Beyoncé. Take me to what’s left of her body, she says.

Sally is the color of ocean floor coral. I think, she must have died this way: A bleached, naked, unremembered thing. We walk together in silence. The redundancy of death and bondage buried her quiet. For the past two hundred years, she has moved like an entire world that has been starved.

When we get to the house, with the four white pillars and white stone, white boy Jefferson sits outside this new Monticello, gnawing on his own white hand, smiling proud at that American flag in the window—the one that mocks us, inflatable black grrls.

Another white boy has purchased the doll. And on the porch, Sally shifts through piles and piles of trash, frantic, for the body of her daughter. She treats litter like it’s precious, like it matters, like it’s worth saving. Like every black grrl who ever got her legs ripped open like cardboard and was raped and raped and raped. Then spent the rest of her life calling her rapist, master. president. father of her children.

I can smell the salt swelling in her eyes that are no longer eyes. I can taste the blood pouring from her vagina that used to be vagina. But Tom can only hear Sally.

He cannot see her now that she is dead and free. White boys never really see black grrls.

History never required them to. Unless they purchase us. Unless we are inflatable. Unless they can quietly fuck us and fashion it into its own kind of puppetry.

See yeah, another white boy has purchased the doll and after about a week, we all so easily forgot. But I demand to know what they did with her body. Is she still being held hostage in the basement of that house? Did they ship her back and try to get a refund?

Was she worth less used? Or did they just chuck her in the fucking trash and think nothing of it?

As if the two words were an abomination, feces he’s been made to swallow.

Or worse: A thirteen-year-old black slave the father of democracy had to claim.

He plunges his fist farther and farther down his own throat,

vomits up the language of all these other dead white folk:

Sorry. We didn’t mean it. The doll did not at all resemble the packaging or the pop star.

The white boys call this an apology. And Tom smiles up at them, waving beside that flag. He is so proud of his countrymen. Meanwhile, I smell Sally dying all over again.

And isn’t that just so very American. 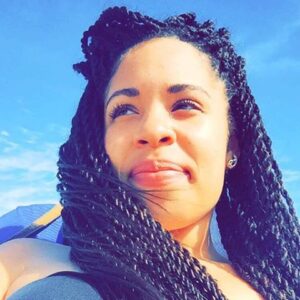 Victoria Newton Ford is a black queer poet from the South, currently living in DC. She has been writing for more than 10 years, and her interests are centered around the black feminist practices of survival, healing, family, spirituality, and history.  Follow Victoria on Twitter at @ajpunch.

Victoria Newton Ford is the co-winner of the 2016 Deacon Maccubbin Young Writer Award in Poetry.