Clarence J. Fluker is a renaissance man who weaves his words and actions into the discourse on social justice, art & culture and civic engagement in the 21st Century. For several years he served in the Mayor?s Office of Gay, Lesbian, Bisexual and Transgender (GLBT) Affairs in Washington, DC. He worked among community organizations, government agencies and constituents to improve, transform, and ensure the delivery of culturally competent services to thousands of GLBT District residents and employees. Clarence uses his dynamic voice as a tool to advance the dialogue about issues of GLBT people of color. An accomplished writer, he served as a contributing writer to SWERV magazine and has been published in ARISE, and The Life magazines, the acclaimed anthology Spirited: Affirming the Soul and Black Lesbian/Gay Identity from Redbone Press, and the Journal of Intergroup Relations. Online, he has contributed to TheRootDC.com, a subsidiary of The Washington Post and the Gay Life section of About.com. On the topic of race and sexual orientation, he has been an invited speaker to several universities across the United States including Columbia University, George Washington University, Howard University and Ohio University. In September 2010 and 2011 he was as a panelist for the 105 Voices of History Diversity and Inclusion Forum addressing students from each of the 105 Historically Black Colleges and Universities in the United States. He has served as a panelist at the national conference for the National Black Justice Coalition and True Colors, the statewide conference for GLBT young people in Connecticut. 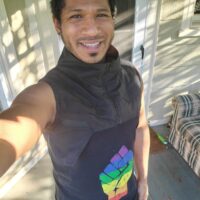