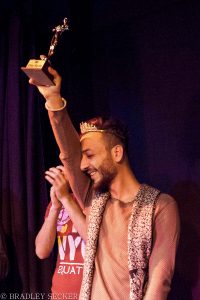 Mr. Gay Syria follows two gay Syrian refugees who are trying to rebuild their lives. Husein is a barber in Istanbul, living a double life between his conservative family and his gay identity. Mahmoud is the founder of Syria’s LGBTI movement and is a refugee in Berlin. What brings them together is a dream: to participate in an international beauty contest as an escape from their trapped lives and an answer to their invisibility. Will the dream come true or will the refugee crisis and the harsh consequences of being gay in the Muslim world shatter it to pieces?