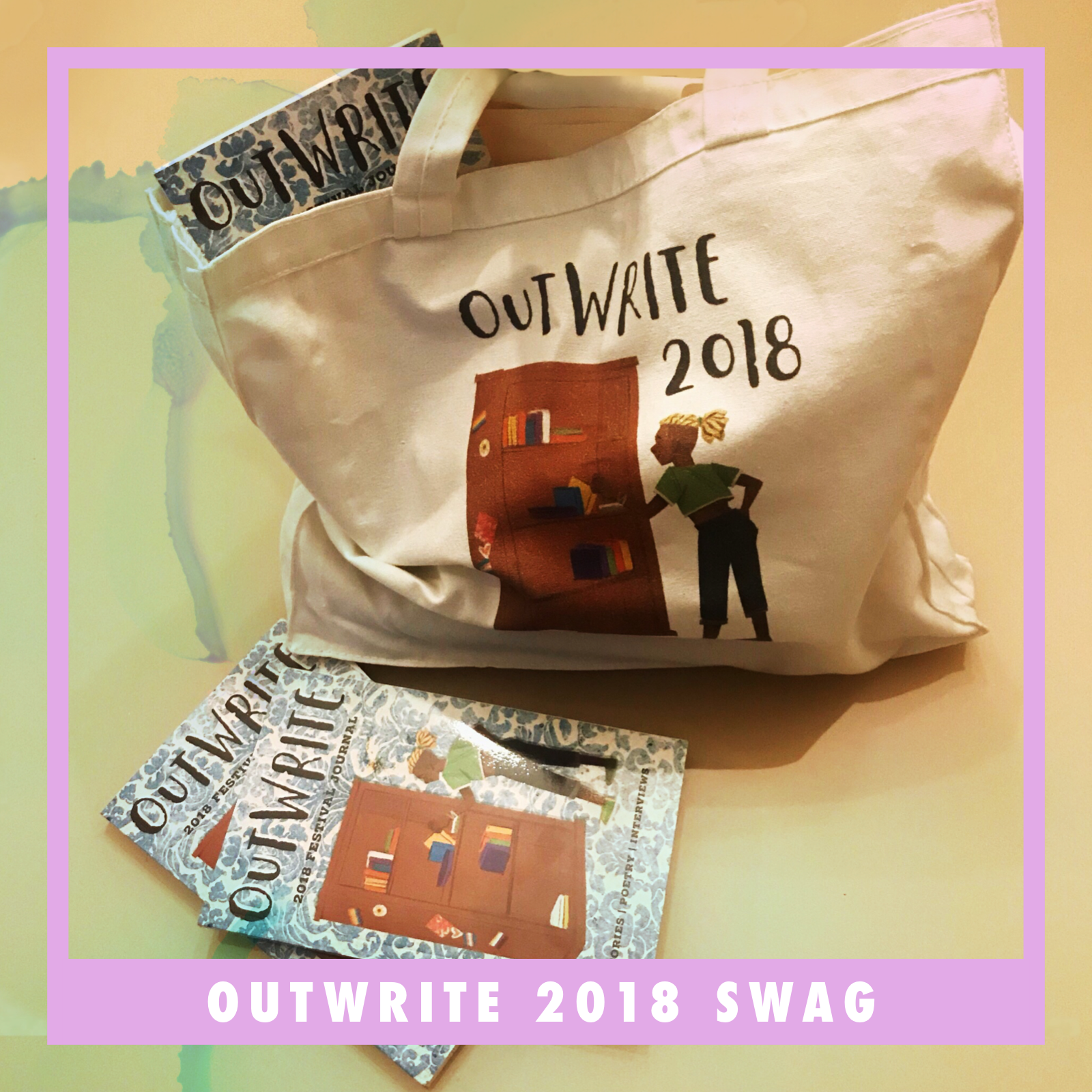 Both our OutWrite 2018 tote and journal feature an illustration created by Joules Garcia.

Each can be purchased separately for $15, or together for $25.  If you’re in the US, we’ll mail them to you, but if you’re outside the US, please email us at outwritedc at gmail dot com and we’ll figure out how much shipping will be.

Please be sure to include your address in the note section before going forward with the paypal transaction. If you forget, email us at the above address and we’ll sort it out.

(If you were a Patron of OutWrite 2018, and were not able to pick up your journal and tote at OutWrite, please email us and we’ll mail yours right away)

Please see below for the bios of our OutWrite 2018 Journal contributors:

Kathy Anderson is the author of Bull and Other Stories (Autumn House Press, 2016), which won the Autumn House Press Fiction Prize, was longlisted for The Story Prize, and was a finalist for Publishing Triangle’s Edmund White Award for Debut Fiction, the Lambda Literary Awards, and the Foreword INDIES Book of the Year Award. She lives with her wife in Philadelphia, PA.

Alexa Black lives in the Washington, D.C., area, where she works as a peer mentor and advocate for people with disabilities. She was a finalist in the erotica category of the 2017 Lambda Literary Awards. She has a master’s degree in philosophy from Georgetown University, but has always returned to her passion for writing. Though a philosopher by training, she would rather inflict complicated questions on her characters and take readers along than lecture about them. When not writing, she can be found gaming, seeking out new restaurants to try, or drinking ridiculous, fancy coffee. She can be found online at facebook.com/alexablackwriter and emailed at alexablack44@gmail.com.

Marlena Chertock has two books of poetry, Crumb-sized (Unnamed Press, 2017) and On that one-way trip to Mars (Bottlecap Press, 2016). She lives in Washington, D.C. and uses her skeletal dysplasia and chronic pain as a bridge to scientific poetry. Her poems and short stories have appeared in Breath & Shadow, Deaf Poets Society, Paper Darts, Rogue Agent, Wordgathering, and more. She serves as the Communications Coordinator for the LGBTQ Writers Caucus and is on the planning committee for OutWrite. Find her at marlenachertock.com or @mchertock.

Dale Corvino has published essays on Marilyn Monroe, Blondie, and kink. His short fiction has appeared in Jonathan and Chelsea Station, and his creative nonfiction in Carte Blanche (CA). He’s participated in live storytelling (RISK!), received the 2015 Christopher Hewitt Award for Fiction, and was a finalist in the 2017 Saints and Sinners Short Fiction contest. More of his writing will appear in the online journal Ovunque Siamo and the anthology Hashtag Queer from Qommunity Press.

Larissa Glasser is a librarian, genre writer, and queer trans woman from Boston. Her short fiction has appeared in Wicked Haunted (New England Horror Writers), Tragedy Queens: stories inspired by Lana Del Rey and Sylvia Plath (Clash Books), Procyon Science Fiction Anthology 2016 (Tayen Lane Publishing), and The Healing Monsters Volume One (Despumation Press). Larissa co-edited Resilience: a collection of stories by trans writers (Heartspark Press), a nominee of The 2017 Lambda Literary Award for Transgender Fiction. Her debut novella F4 is available from Eraserhead Press. Larissa is a Member at Large of Broad Universe, which advocates for female-identified writers of genre fiction. She is on Twitter @larissaeglasser and blogs at larissaglasser.com.

Georgette Gouveia is the author of “The Penalty for Holding,” a 2018 Lambda Literary Awards finalist, and “Water Music.” They’re part of her novel series “The Games Men Play,” which is also the name of the sports, culture, sex blog she writes. A 2018 Folio Women in Media award winner, Georgette is the editor in chief a WAG, a luxury lifestyle magazine in metro New York. For more, visit thegamesmenplay.com.

Elizabeth Hodge’s first poetry anthology, Undone, won a Golden Crown Literary Society Award for Poetry, an Honorable mention Rainbow Award. She spent 18 years as a Philosophy professor for a small college. As a professor she focused on scholarly writing, not what she really wanted to write – science fiction and poetry. She left her teaching position in order to become a full-time writer.

Catherine Lundoff is an award-winning writer editor, and publisher from Minneapolis. Her books include Night’s Kiss, Crave, Haunted Hearths and Sapphic Shades: Lesbian Ghost Stories, Hellebore and Rue: Tales of Queer Women and Magic, Silver Moon and Out of This World: Queer Speculative Fiction Stories. She is the publisher at Queen of Swords Press, a new genre fiction publisher specializing in fiction from out of this world. catherinelundoff.net and queenofswordspress.com.

Marcos L. Martínez is co-founder and acquisitions editor at Stillhouse Press. A Lambda Literary Fellow in Fiction, Marcos’ work has appeared in The Washington Blade, RiverSedge, Whiskey Island, the HIV +/- Here and Now Project, and as a Split This Rock poem-of-the-week. Marcos is currently working on a novel (Embarkations) and a companion collection of poetry that addresses climate change and the ways human hearts trouble the world. He earned his MFA in Fiction from George Mason University, and is a writing lecturer at New York University’s Washington, D.C. global studies campus as well as George Washington University.

Gar McVey-Russell began fiction writing in the early 90s. His work has appeared in Sojourner: Black Gay Voices in the Age of AIDS (1993), and other publications. Sin Against the Race (2017) is his first novel.

Mary Anne Mohanraj is the author of Bodies in Motion (HarperCollins), The Stars Change (Circlet Press) and twelve other titles. Bodies in Motion was a finalist for the Asian American Book Awards, a USA Today Notable Book, and has been translated into six languages.  Mohanraj founded the Hugo-nominated science fiction magazine, Strange Horizons, and founded Jaggery, a South Asian literary journal (jaggerylit.com). She received a Breaking Barriers Award from the Chicago Foundation for Women for her work in Asian American arts organizing, won an Illinois Arts Council Fellowship in Prose, and was Guest of Honor at WisCon. She serves as Director of two literary organizations, DesiLit (desilit.org) and The Speculative Literature Foundation (speclit.org). Mohanraj is Clinical Associate Professor of English at the University of Illinois at Chicago, and lives in a creaky old Victorian in Oak Park, just outside Chicago, with her partner, their two small children, and a sweet dog. Recent publications include stories for George R.R. Martin’s Wild Cards series and stories at Clarkesworld, Asimov’s, and Lightspeed.  2017-2018 titles include Survivor (a SF/F anthology), Perennial, and Invisible 3 (co-edited with Jim C. Hines). maryannemohanraj.com.

Jenn Polish is the author of two young adult books, Lunav and Lost Boy, Found Boy (March 2018, NineStar Press). Their debut novel, Lunav, a lesbian enemies-to-lovers faerie tale, features dragons that grow on trees and friendship amongst rebellion. Their debut novella, Lost Boy, Found Boy, is a scifi re-telling of Peter Pan in which Neverland is a holomatrix, Hook is a bisexual cyborg, and Tink is an asexual lesbian computer interface. They teach Theater and English in the CUNY system, where they are also a doctoral candidate in English. They live in New York with their wife and their fantasies of having multiple puppies. Their website is jpolish.com.

Don Sakers has been queering science fiction and fantasy for 35 years. He also reviews books for Analog Magazine. He is best known for his Scattered Worlds series and Curse of the Zwilling, a dark fantasy set in Maryland. He’s co-author (with Melissa Scott) of the innovative serial space opera The Rule of Five.

Xemiyulu Manibusan Tapepechul is a Nawat Two-Spirit from Kuskatan, the land known internationally as El Salvador. She is a playwright, spoken word artist, the author of the book Metzali: Siwayul Shitajkwilu, the Director of Art and Culture of Trans Latin@ Coalition DMV, the Director of Nelwat Ishkamewe Two-Spirit Artist Collective, and a Resident at EarthStar Two-Spirit Nation.

Tyler Vile is a writer, performer, and activist from Baltimore, MD whose novel-in-verse, Never Coming Home, is available on Topside Press. She is a member of the board of Hinenu: The Baltimore Justice Shtiebl, a radically inclusive synagogue, and was the vocalist in a punk band called Anti-Androgen. Her interactive poetry zine, Hassidic Witch Murderer, is available on her website, tylervile.wordpress.com. Her work has appeared in the Lambda Literary Award nominated anthology, Resilience, published by Heartspark Press, as well as the magazines Femmescapes, Beltway Poetry Quarterly, and Rogue Agent. She hopes to one day become the world’s greatest transsexual lesbian yenta.

Victoria Zelvin is a writer living and working in Arlington, Virginia. Her work has appeared in Daily Science Fiction, Shoreline of Infinity, and numerous anthologies. These days she is digging out from under a pile of impulse purchased unread books, and you can heckle her @victoriarius_. Her other work can be found at victoriazelvin.com.