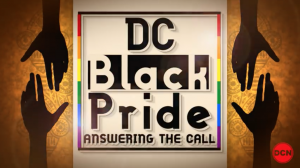 Marvin Bowser was inspired to produce his TV special DC Black Pride — ANSWERING THE CALL 18 months ago while doing research for an article about the relevance of DC Black Pride today.  Last May, he realized that the history DC Black Pride is poorly documented and remembered and that he needed to do something about it while some of the leaders are still alive to tell their stories.
Marvin developed a comprehensive treatment for an interview program that could be executed as a documentary, TV special, a TV series of even a pod cast.  He pitched the concept to the District of Columbia Office of Cable Television, Film, Music & Entertainment.  Working with OCTFME producers, we agreed that the TV special format is the right fit for the project. He interviewed leaders who created the first DC Black Pride, today’s leaders in DC’s Black LGBTQ community to explore if issues that existing in the late 80’s early 90’s are still issues, and emerging leaders to look at the future of the Black LGBTQ community .