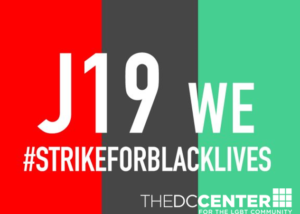 The DC Center will be closed on June 19, 2020 in observance of Juneteenth

to support the #StrikeForBlackLives. #BlackLivesMatter

If you are facing a life threatening situation or seeking immediate care:

Taking guidance and recommendations about social distancing from the DC government and the CDC, effective Monday, March 16th, The DC Center for the LGBT Community’s office will be closed. Staff are still working remotely, and will be checking emails and voicemails multiple times each day. Please reach out to supportdesk@thedccenter.org to connect with the DC Center, as we are still able to provide services and support.

If you are interested in attending support groups remotely, please reach out to your facilitator or supportdesk@thedccenter.org and we can provide options for remote meetings using conference lines.

The situation is changing rapidly, please refer to the CDC’s website and coronavirus.dc.gov for up-to-date information on what you can do to help prevent and slow the spread of the coronavirus.

The DC Center team will be meeting regularly to assess the situation and rest assured that we will open as soon as it is safe to do so, as we know that many of our clients and participants are vulnerable and will need support. If you are able, please consider donating and supporting organizations that provide food, medicine, and other support to marginalized populations.

If you are facing a life threatening situation or seeking immediate care:

Hello friends,
In order to help reduce the spread of the coronavirus, the DC Center is closed effective Monday, March 16th. To protect the health and safety of everyone we have decided to postpone our health and wellness festival. Please consider how you can help delay the spread of coronavirus by consulting sites such as https://coronavirus.dc.gov/ for more information.

On March 28th, the DC Center will host its first ever health and wellness fair, as we work towards putting the finishing touches on our programming schedule, we are encouraging small to large organizations, businesses and nonprofits to sign up for a table or sign up to become a partnering sponsor of this wellness event. So far, we have organizations and businesses from varied backgrounds that are partnering with us. This Health & Wellness Fair represents The DC Center’s commitment to a strong and healthy community and is part of our ongoing effort to provide a safe space for the LGBT community to access basic health screenings and important information. Everyone is welcome and encouraged to attend. We seek to provide a comprehensive offering geared towards the health and wellness of LGBTQ people in body, mind, and spirit as such we will be having several different workshops,pop-ups and panel discussion on LGBTQ health and wellness. We will have a day full of hands-on health and wellness activities including yoga, self-defense, tai chi, meditation, acupuncture, and massage. HIV testing, STI testing, and other health screenings will be available. Space is limited. Click the link below to register:
https://thedccenter.org/events/healthfest/

*** Hello friends,
In order to help reduce the spread of the coronavirus, the DC Center is closed effective Monday, March 16th. To protect the health and safety of everyone we have decided to postpone our health and wellness festival, we will no longer have the event on March 28th , a new date will be decided in the future. Please consider how you can help delay the spread of coronavirus by consulting sites such as https://coronavirus.dc.gov/ for more information. ***

Due to unfortunate circumstances, we have been forced to reschedule our Wellness Expo. Join us on Saturday, March 28th for our first-ever DC LGBTQ Health and Wellness Expo.

Please click here for the updated event information, and if you have previously registered there’s no need to re-register. Thank you for your patience. If you have any questions please email supportdesk@thedccenter.org.

Sexual and gender minority Veterans have faced stigma and discrimination, which can affect health. As a healthcare institution, we need to work to make sure that Veterans with LGBT and related identities know that they are welcome at VA.

There is an LGBT VCC at every facility to help you get the care you need. Contact the LGBT VCC at your nearest facility.

Does my sexual orientation or gender identity matter to my health care?

As a result of stigma, stress, and discrimination, Veterans with LGBT and related identities face increased health risks and unique challenges in health care. We want you to be comfortable talking with your VA providers about all aspects of your life, so we can offer you the best care possible.

Learn about health risks and why you should talk to your provider about your sexual orientation identity, birth sex, and self-identified gender identity in the fact sheets below.

Why do you use the term “LGBT and related identities?”

Are there any providers specializing in transgender Veteran care in my area?

How do I get transition-related care at the VA?

Why are there resources being devoted to LGBT Veterans?

Information from the US Dept. of Veteran Affairs.

Center Military. We are exploring the possibility of a a peer facilitated monthly support group for military folks on active duty and first-responders (Fire, EMS, Police, etc). This group may also be open to veterans based on feedback from the community. If you are interested, please fill out the form below.

It has been a tradition continued in some form or fashion every Veterans Day since 1989.  LGBTQ Community members have gathered in the Congressional Cemetery at the grave of Sgt. Leonard Matlovich on Veterans Day to remember his service and sacrifice, and honor all our LGBT Veterans and Service Members.

Despite 12 years of exemplary service and receiving a Purple Heart, the Air Force demanded his discharge simply because he was gay.   Sgt. Matlovich made history when he came out and was the first LGBT person on the cover of Time Magazine in 1975.   This year’s service was organized by James Thonley, a USA and USMC Veteran who was himself investigated for “homosexual conduct” while serving our country.

Nearby the grave you can find the gravestones and markers of many notable LGBT activists including Frank Kameny and Barbara Gittings.  Next to his grave, the LGBT Fallen Heroes Fund has purchased land to build a permanent memorial to all our fallen LGBT veterans and service members.

This year Lieutenant Colonel (Ret.) Ann Murdoch had the honor of laying the wreath.  Previous individuals who have had this honor include Lt. Dan Choi and David Merrill.

See video from the service below.  You can also see pictures from the event on the Center Military Facebook page at facebook.com/centermilitary.

Thanks to everyone who made this year’s event possible.

Center Military, a program of the DC Center, is a resource for LGBT Service Members, Veterans, and their families.  Find out more at thedccenter.org/military.  You can also find us on twitter at twitter.com/centermilitary or on facebook at facebook.com/centermilitary.

If you would like to support work like this at the DC Center for the LGBT Community, make a donation here.

The memorial will be located in what has become a special location at the cemetery, where several LGBT community members are remembered.   The memorial is steps away from the gravesite of Sergeant Leonard P. Matlovich, a vietnam veteran remembered for bravely coming out as gay on the cover of Time Magazine in 1975.  The site is adjacent to the memorial marker for LGBT civil rights pioneer and veteran Frank Kameny.

An annual service to honor LGBT Veterans takes place every year at the cemetery on Veterans Day.

Other individuals memorialized at the Cemetery include Barbara Gittings (Daughters of Bilitis, The Ladder); Alain Locke (hailed by many as the father of the Harlem Renaissance); and Peter Doyle (believed by historians to have been the greatest love of gay American poet Walt Whitman).

While the deposit has been made on the memorial site, the LGBT Fallen Heroes Funds will be making monthly payments for the site for the next two years.  To make a donation to support this important work, visit their website at lgbtfallenheroesfund.org.